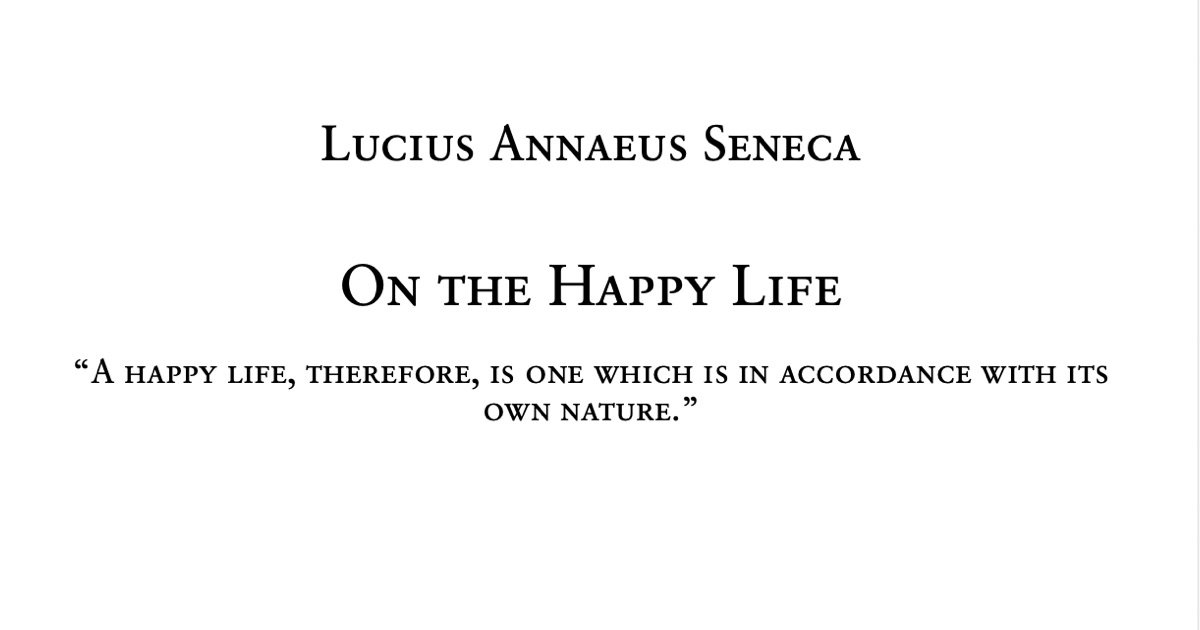 The essay “On the Happy Life“ was written around the year 58 AD destined to his older brother, Gallio, to whom Seneca also dedicated his dialogue De Ira (“On Anger”). Seneca explains that the search for happiness is the search for reason. The main point to understand about the text is the title itself: ‘Happy’ here does not have the modern connotation of feeling good, but it is the equivalent of the Greek word eudaimonia, which is better understood as a life worthy of being lived, a state of plenitude of self. For Seneca and the stoics, the only life worth living is that of moral righteousness, the kind of existence we look at in the end and can honestly say that we are not ashamed.

Right in the first paragraph Seneca provides the stoic line of argument: We should not have happiness as our goal: “so far is it from being easy to attain to happiness that the more eagerly a man struggles to reach it the further he departs from it, if he takes the wrong road; for, since this leads in the opposite direction, his very swiftness carries him all the further away”. The solution is to aim for virtue. Happiness will be a consequence.

In the essay Seneca makes great opposition to the epicureans, a philosophical school that gives value to pleasure as a source of happiness, as we see in section ten: “You devote yourself to pleasures, I check them; you indulge in pleasure, I use it; you think that it is the highest good, I do not even think it to be good: for the sake of pleasure I do nothing, you do everything.”. In section XV, Seneca explains why one cannot simply associate virtue with pleasure. The problem is that sooner or later pleasure will lead you into non-virtuous territories: “You do not afford virtue a solid immoveable base if you bid it stand on what is unsteady”.

In book VII he further elaborates on the distinction between pleasure and reason: “if they were entirely inseparable, we should not see some things to be pleasant, but not honourable, and others most honourable indeed, but hard and only to be attained by suffering.” Now, one could reasonably reject the distinction Seneca is trying to make, but then would be hard pressed to explain a large range of human behaviors where people do seem to genuinely prefer something despite its unpleasantness, for principled reasons, because they think it is good and honorable.

Section X ends with perhaps the sharpest contrast between Epicureanism and Stocism: “You devote yourself to pleasures, I check them; you indulge in pleasure, I use it; you think that it is the highest good, I do not even think it to be good: for the sake of pleasure I do nothing, you do everything.” Further, Seneca construct a finely balanced defense of Epicureanism from the apparently common abuse that many made of the school: “So, men are not encouraged by Epicurus to run riot, but the vicious hide their excesses in the lap of philosophy, and flock to the schools in which they hear the praises of pleasure. They do not consider how sober and temperate—for so, by Hercules, I believe it to be that “pleasure” of Epicurus is, but they rush at his mere name, seeking to obtain some protection and cloak for their vices. They lose, therefore, the one virtue which their evil life possessed, that of being ashamed of doing wrong: for they praise what they used to blush at, and boast of their vices… The reason why that praise which your school lavishes upon pleasure is so hurtful, is because the honourable part of its teaching passes unnoticed, but the degrading part is seen by all.” This is a good example of Seneca’s justice, as well as of his compelling style of argumentation, whereby he is able to both strike a point in favor of his opponents and one against them in a single sentence. After this Seneca goes back to a critique of the pleasure principle: “those who have permitted pleasure to lead the van, have neither one nor the other: for they lose virtue altogether, and yet they do not possess pleasure, but are possessed by it, and are either tortured by its absence or choked by its excess, being wretched if deserted by it, and yet more wretched if overwhelmed by it”.

In section XX provides a list of rules that Seneca believe will lead to happiness. These are worth fully consideration: