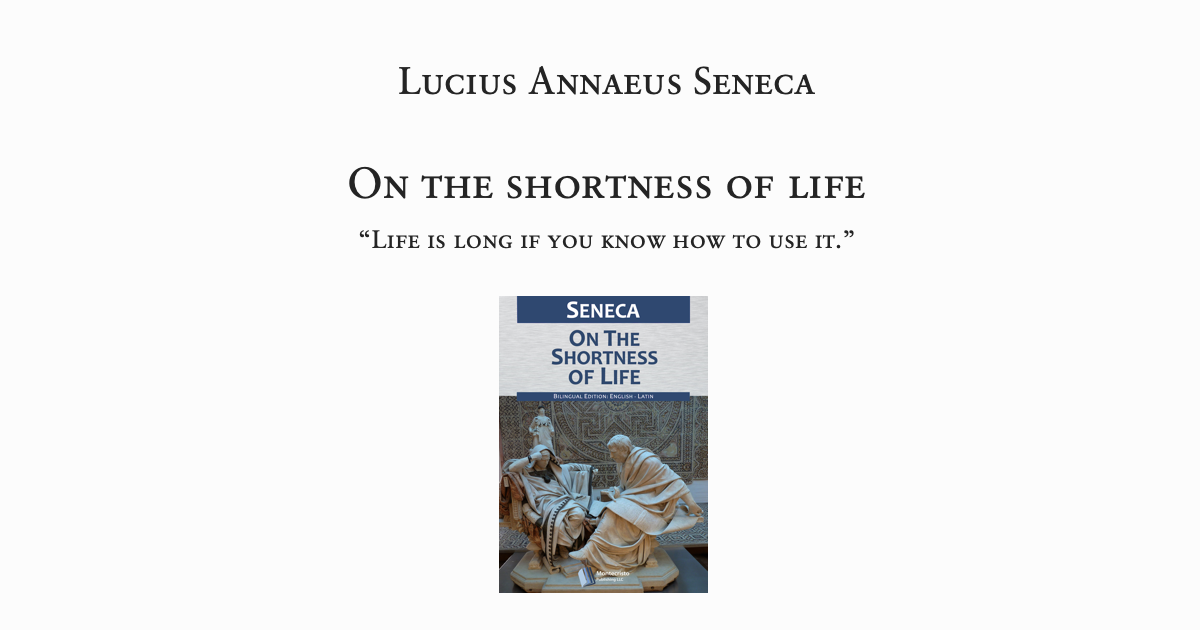 Seneca wrote On the shortness of life in 49, the year he returned to Rome from his exile in Corsica. The twenty sections were written as a moral essay addressed to his friend Paulinus. It begins: “The majority of mortals, Paulinus, complain bitterly of the spitefulness of Nature, because we are born for a brief span of life, because even this space that has been granted to us rushes by so speedily and so swiftly that all save a very few find life at an end just when they are getting ready to live.” (I, 1)

Seneca immediately argues that it is not really the case that human life is short, but that the majority of people waste much of it.  “The part of life we really live is small. For all the rest of existence is not life, but merely time.” (II, 3)

In section III he observes that we tend to carefully safeguard goods that can be exchanged for money, and yet we are incredibly wasteful of the one thing that people cannot give us back: time: “Look back in memory and consider when you ever had a fixed plan, how few days have passed as you had intended, when you were ever at your own disposal, when your face ever wore its natural expression, when your mind was ever unperturbed, … how much was taken up in useless sorrow, in foolish joy, in greedy desire; you will perceive that you are dying before your season!” (III, 3)

After this passage, Seneca reproaches Paulinus for leaving only scraps of his life to the pursuit of wisdom after he had taken care of ordinary business:  “Are you not ashamed to reserve for yourself only the remnant of life, and to set apart for wisdom only that time which cannot be devoted to any business? How late it is to begin to live just when we must cease to live!” (III, 5)

Seneca says that putting things off is a great waste of life’s resources and also that “yet postponement is the greatest waste of life; it deprives them of each day as it comes, it snatches from them the present by promising something hereafter”. In section X, he says that life can be divided into three main parts: “Life is divided into three periods—that which has been, that which is, that which will be. Of these the present time is short, the future is doubtful, the past is certain.”

What, then, is a good way to spend your life? Not surprisingly, Seneca suggests engaging in conversations with philosophers of all times, as we can do by reading this book: “we have access to all ages, and if it is our wish, by greatness of mind, to pass beyond the narrow limits of human weakness, there is a great stretch of time through which we may roam. We may argue with Socrates, we may doubt with Carneades, find peace with Epicurus, overcome human nature with the Stoics, exceed it with the Cynics.” and then “We are wont to say that it was not in our power to choose the parents who fell to our lot, that they have been given to men by chance; yet we may be the sons of whomsoever we will. Households there are of noblest intellects; choose the one into which you wish to be adopted; you will inherit not merely their name, but even their property, which there will be no need to guard in a mean or niggardly spirit; the more persons you share it with, the greater it will become.” (XV, 3)

Book on sale at Amazon, Apple, Kobo and GooglePlay.