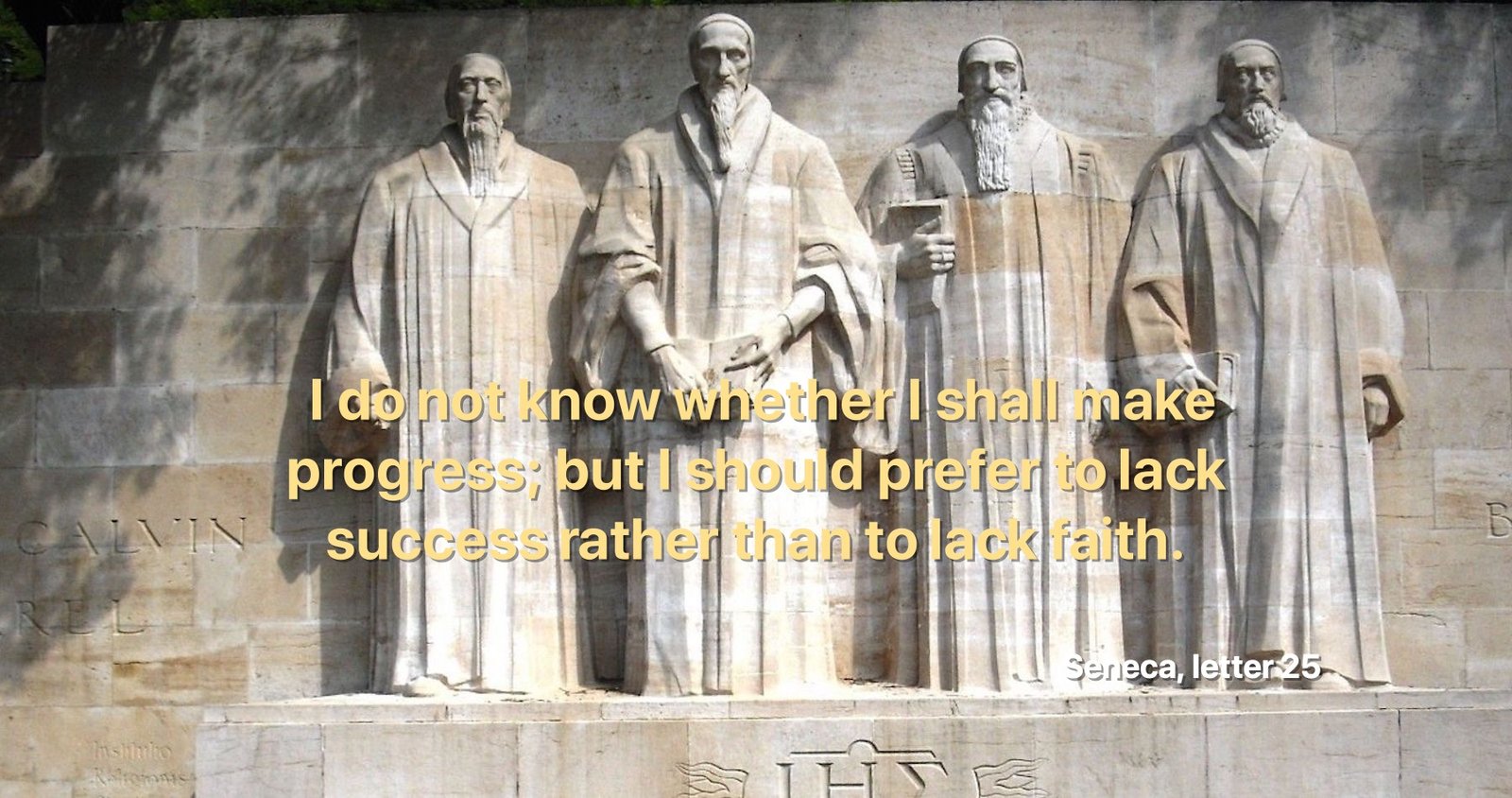 In Letter XXV Seneca discusses change and the hard work it always requires. He writes to Lucilius about two friends in common: an old man and a young man, both needing some correction to get their lives back on track. Should we try to or could we change someone else?

Seneca says it depends: the context is everything and the same approach will not work in every case. So what are the most important settings to consider, and when is the right time to force change rather than wait?

“I do not know whether I shall make progress; but I should prefer to lack success rather than to lack faith”. (XXV, 2)

This is one of those phrases that describe or better frame stoicism and its way of thinking. It is more important to have faith and to strive toward your goal than to actually achieve it.

In the text, Seneca returns to the theme of moving away from the mob, as in letters VII and XI where he mentions that it is bad to be alone if you are not virtuous enough. In this letter he clarifies everything.

“The time when you should most of all withdraw into yourself is when you are forced to be in a crowd.” Yes, provided that you are a good, tranquil, and self-restrained man; otherwise, you had better withdraw into a crowd in order to get away from your self. Alone, you are too close to a rasca”l. (XXV, 7)

1. With regard to these two friends of ours, we must proceed along different lines; the faults of the one are to be corrected, the other’s are to be crushed out. I shall take every liberty; for I do not love this one[1] if I am unwilling to hurt his feelings. “What,” you say, “do you expect to keep a forty-year-old ward under your tutelage? Consider his age, how hardened it now is, and past handling!

2. Such a man cannot be re-shaped; only young minds are moulded.” I do not know whether I shall make progress; but I should prefer to lack success rather than to lack faith. You need not despair of curing sick men even when the disease is chronic, if only you hold out against excess and force them to do and submit to many things against their will. As regards our other friend I am not sufficiently confident, either, except for the fact that he still has sense of shame enough to blush for his sins. This modesty should be fostered; so long as it endures in his soul, there is some room for hope. But as for this veteran of yours, I think we should deal more carefully with him, that he may not become desperate about himself.

3. There is no better time to approach him than now, when he has an interval of rest and seems like one who has corrected his faults. Others have been cheated by this interval of virtue on his part, but he does not cheat me. I feel sure that these faults will return, as it were, with compound interest, for just now, I am certain, they are in abeyance but not absent. I shall devote some time to the matter, and try to see whether or not something can be done.

4. But do you yourself, as indeed you are doing, show me that you are stout-hearted; lighten your baggage for the march. None of our possessions is essential. Let us return to the law of nature; for then riches are laid up for us. The things which we actually need are free for all, or else cheap; nature craves only bread and water. No one is poor according to this standard; when a man has limited his desires within these bounds, he can challenge the happiness of Jove himself, as Epicurus says. I must insert in this letter one or two more of his sayings:[2]

5. “Do everything as if Epicurus were watching you.” There is no real doubt that it is good for one to have appointed a guardian over oneself, and to have someone whom you may look up to, someone whom you may regard as a witness of your thoughts. It is, indeed, nobler by far to live as you would live under the eyes of some good man, always at your side; but nevertheless I am content if you only act, in whatever you do, as you would act if anyone at all were looking on; because solitude prompts us to all kinds of evil.

6. And when you have progressed so far that you have also respect for yourself, you may send away your attendant; but until then, set as a guard over yourself the authority of some man, whether your choice be the great Cato or Scipio, or Laelius, – or any man in whose presence even abandoned wretches would check their bad impulses. Meantime, you are engaged in making of yourself the sort of person in whose company you would not dare to sin. When this aim has been accomplished and you begin to hold yourself in some esteem, I shall gradually allow you to do what Epicurus, in another passage, suggests:[3] “The time when you should most of all withdraw into yourself is when you are forced to be in a crowd.”

7. You ought to make yourself of a different stamp from the multitude. Therefore, while it is not yet safe to withdraw into solitude,[4] seek out certain individuals; for everyone is better off in the company of somebody or other, – no matter who, – than in his own company alone. “The time when you should most of all withdraw into yourself is when you are forced to be in a crowd.” Yes, provided that you are a good, tranquil, and self-restrained man; otherwise, you had better withdraw into a crowd in order to get away from your self. Alone, you are too close to a rascal.