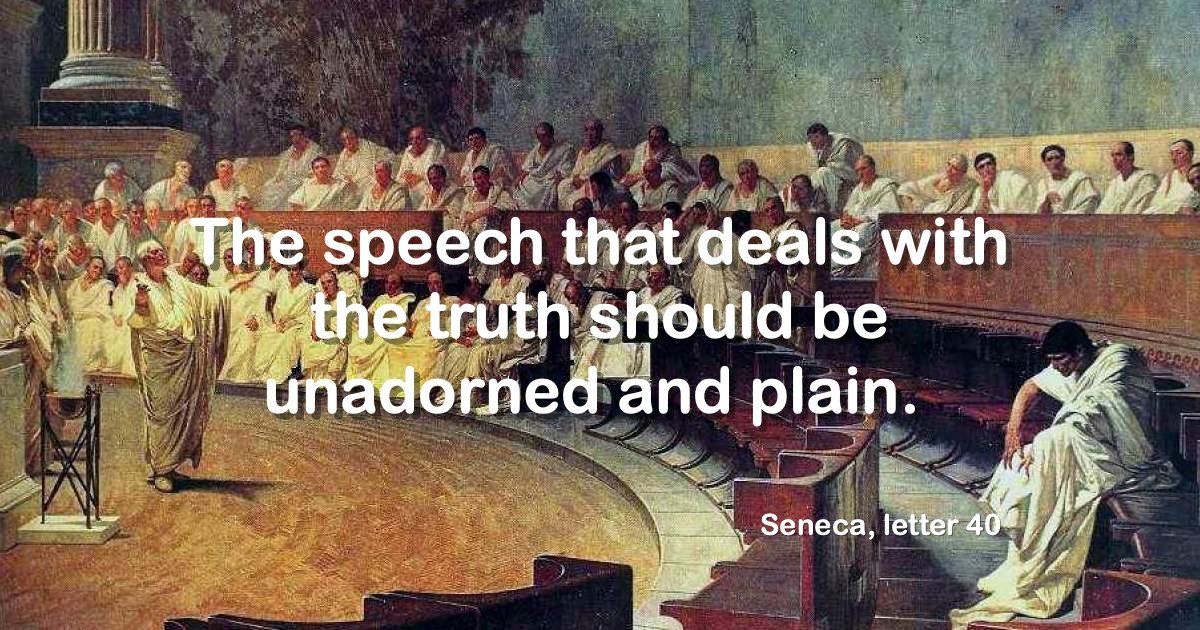 In letter 40, the continuation a previous one, is discussed how should be the speech of a philosopher. It is a practical letter, with a clear precept on how to behave. According to Seneca, a philosopher must be serene and well-ordered when speaking; his communication must be simple and without artifice.

“Therefore, mark my words; that forceful manner of speech, rapid and copious, is more suited to a mountebank than to a man who is discussing and teaching an important and serious subject. But I object just as strongly that he should drip out his words as that he should go at top speed; he should neither keep the ear on the stretch, nor deafen it. For that poverty-stricken and thin-spun style also makes the audience less attentive because they are weary of its stammering slowness; nevertheless, the word which has been long awaited sinks in more easily than the word which flits past us on the wing. Finally, people speak of “handing down” precepts to their pupils; but one is not “handing down” that which eludes the grasp. (XL, 3-4)

Following, Sêneca compares various styles of famous speakers and situations where the speaker should be more or less eloquent. He ends the letter reinforcing the initial argument:

“Therefore, the ultimate kernel of my remarks is this: I bid you be slow of speech.” (XL, 14)

XL. On the Proper Style for a Philosopher’s Discourse

1. I thank you for writing to me so often; for you are revealing your real self to me in the only way you can. I never receive a letter from you without being in your company forthwith. If the pictures of our absent friends are pleasing to us, though they only refresh the memory and lighten our longing by a solace that is unreal and unsubstantial, how much more pleasant is a letter, which brings us real traces, real evidences, of an absent friend! For that which is sweetest when we meet face to face is afforded by the impress of a friend’s hand upon his letter, – recognition.

2. You write me that you heard a lecture by the philosopher Serapio,[1] when he landed at your present place of residence. “He is wont,” you say, “to wrench up his words with a mighty rush, and he does not let them flow forth one by one, but makes them crowd and dash upon each other.[2] For the words come in such quantity that a single voice is inadequate to utter them.” I do not approve of this in a philosopher; his speech, like his life, should be composed; and nothing that rushes headlong and is hurried is well ordered. That is why, in Homer, the rapid style, which sweeps down without a break like a snow-squall, is assigned to the younger speaker; from the old man eloquence flows gently, sweeter than honey.[3]

3. Therefore, mark my words; that forceful manner of speech, rapid and copious, is more suited to a mountebank than to a man who is discussing and teaching an important and serious subject. But I object just as strongly that he should drip out his words as that he should go at top speed; he should neither keep the ear on the stretch, nor deafen it. For that poverty-stricken and thin-spun style also makes the audience less attentive because they are weary of its stammering slowness; nevertheless, the word which has been long awaited sinks in more easily than the word which flits past us on the wing. Finally, people speak of “handing down” precepts to their pupils; but one is not “handing down” that which eludes the grasp.

4. Besides, speech that deals with the truth should be unadorned and plain. This popular style has nothing to do with the truth; its aim is to impress the common herd, to ravish heedless ears by its speed; it does not offer itself for discussion, but snatches itself away from discussion. But how can that speech govern others which cannot itself be governed? May I not also remark that all speech which is employed for the purpose of healing our minds, ought to sink into us? Remedies do not avail unless they remain in the system.

5. Besides, this sort of speech contains a great deal of sheer emptiness; it has more sound than power. My terrors should be quieted, my irritations soothed, my illusions shaken off, my indulgences checked, my greed rebuked. And which of these cures can be brought about in a hurry? What physician can heal his patient on a flying visit? May I add that such a jargon of confused and ill-chosen words cannot afford pleasure, either?

6. No; but just as you are well satisfied, in the majority of cases, to have seen through tricks which you did not think could possibly be done,[4] so in the case of these word-gymnasts, – to have heard them once is amply sufficient. For what can a man desire to learn or to imitate in them? What is he to think of their souls, when their speech is sent into the charge in utter disorder, and cannot be kept in hand?

7. Just as, when you run down hill, you cannot stop at the point where you had decided to stop, but your steps are carried along by the momentum of your body and are borne beyond the place where you wished to halt; so this speed of speech has no control over itself, nor is it seemly for philosophy; since philosophy should carefully place her words, not fling them out, and should proceed step by step.

8. “What then?” you say; “should not philosophy sometimes take a loftier tone?” Of course she should; but dignity of character should be preserved, and this is stripped away by such violent and excessive force. Let philosophy possess great forces, but kept well under control; let her stream flow unceasingly, but never become a torrent. And I should hardly allow even to an orator a rapidity of speech like this, which cannot be called back, which goes lawlessly ahead; for how could it be followed by jurors, who are often inexperienced and untrained? Even when the orator is carried away by his desire to show off his powers, or by uncontrollable emotion, even then he should not quicken his pace and heap up words to an extent greater than the ear can endure.

9. You will be acting rightly, therefore, if you do not regard those men who seek how much they may say, rather than how they shall say it, and if for yourself you choose, provided a choice must be made, to speak as Publius Vinicius the stammerer does. When Asellius was asked how Vinicius spoke, he replied: “Gradually”! (It was a remark of Geminus Varius, by the way: “I don’t see how you can call that man ‘eloquent’; why, he can’t get out three words together.”) Why, then, should you not choose to speak as Vinicius does?

10. Though of course some wag may cross your path, like the person who said, when Vinicius was dragging out his words one by one, as if he were dictating and not speaking. “Say, haven’t you anything to say?” And yet that were the better choice, for the rapidity of Quintus Haterius, the most famous orator of his age, is, in my opinion, to be avoided by a man of sense. Haterius never hesitated, never paused; he made only one start, and only one stop.

11. However, I suppose that certain styles of speech are more or less suitable to nations also; in a Greek you can put up with the unrestrained style, but we Romans, even when writing, have become accustomed to separate our words.[5] And our compatriot Cicero, with whom Roman oratory sprang into prominence, was also a slow pacer.[6] The Roman language is more inclined to take stock of itself, to weigh, and to offer something worth weighing.

12. Fabianus, a man noteworthy because of his life, his knowledge, and, less important than either of these, his eloquence also, used to discuss a subject with dispatch rather than with haste; hence you might call it ease rather than speed. I approve this quality in the wise man; but I do not demand it; only let his speech proceed unhampered, though I prefer that it should be deliberately uttered rather than spouted.

13. However, I have this further reason for frightening you away from the latter malady, namely, that you could only be successful in practising this style by losing your sense of modesty; you would have to rub all shame from your countenance,[7] and refuse to hear yourself speak. For that heedless flow will carry with it many expressions which you would wish to criticize.

14. And, I repeat, you could not attain it and at the same time preserve your sense of shame. Moreover, you would need to practise every day, and transfer your attention from subject matter to words. But words, even if they came to you readily and flowed without any exertion on your part, yet would have to be kept under control. For just as a less ostentatious gait becomes a philosopher, so does a restrained style of speech, far removed from boldness. Therefore, the ultimate kernel of my remarks is this: I bid you be slow of speech.

One Reply to “Letter XL. On the Proper Style for a Philosopher’s Discourse”